LSLP as an Academic Unit

The Literacies in Second Languages Project is housed at the School of Education and Pedagogy at UPB. As an academic project, we operate both as a student research group and an autonomous research lab that supports other academic programs at the preservice and advanced education levels.

LSLP would not exist without the momentum that The Student Research Group on Second Languages (SRG-L2) gained, so it is fair recalling a bit of SRG-L2's history. Below we share a timeline of our (r)evolution: 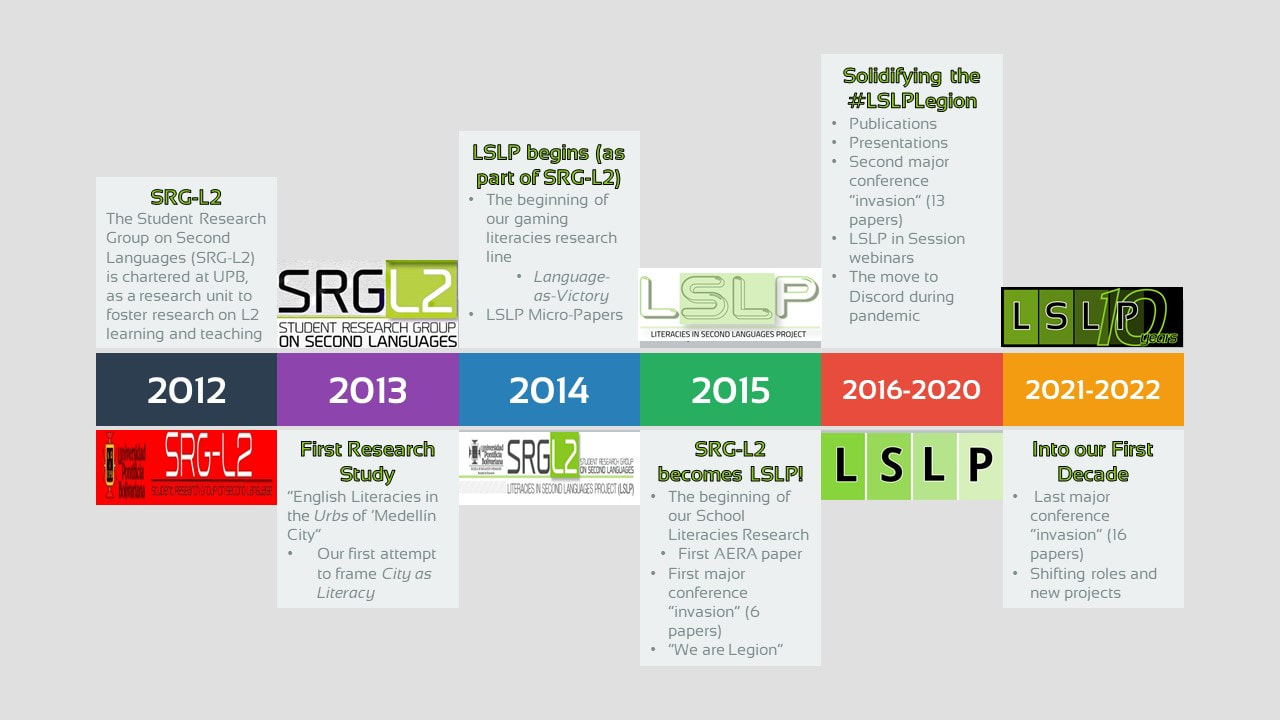 The first hints of what LSLP would be started in August, 2011. Raúl, at the time a recently hired assistant professor at UPB, was in charge of developing a student research lab (or semillero de investigación in Spanish) to provide a space for students at the Faculty of Education to pursue their research interests in the field of second languages. At the planning stage, there were two proposed lines for this unit: One on literacy (based on Raúl's dissertation) and one on teacher education (led by another professor).

Once the proposal was presented in 2012, SRG-L2 was officially chartered and endorsed by the Research, Development, and Innovation Center at UPB [Now the Office of the Provost for Research Affairs]. SRG-L2 welcomed its first students between 2012 and 2013 and we drafted our first research study to start in 2013.

In 2014, our international presence continued to grow, as we presented papers at the International Congress of Qualitative Inquiry in the United States and at iSLE-3 in Switzerland. That year, we also launched our web-based publication, the LSLP Micro-Papers, we sent our first-ever proposal for the AERA Annual Meeting, and we introduced our very first motto, "How big do we want to dream today?" To cap our successes in 2014, we received two awards at the student research lab meeting: One for best paper in social sciences and one for the best stand.

LSLP at the 2014 student research lab meeting at UPB.

the third stage: LSLP and the Legion

By 2015, the literacies line at SRG-L2 was already firing at all cylinders: Our paper for AERA was accepted and we were preparing our first major participation at a conference (the ASOCOPI Annual Conference in Medellín). But, we were facing a hurdle: SRG-L2 was supposed to have two lines, only one was operational. At that time, we made a formal request to split SRG-L2 so LSLP could be a stand-alone unit. The request was approved in July and we launched our website shortly after. We capped the year with our second AERA paper and our first major publication about LSLP in Journal of Adolescent & Adult Literacy.

That was also the year we started calling ourselves "The Legion"... but you have to read that story in Our Legion.

And while we are here reminiscing... how about we revisit this video from 2016...

Since its inception, LSLP has been actively involved in research. We have already developed four research projects, with three under development  (all of them endorsed and funded by the Research, Development, and Innovation Center at UPB [CIDI]; see our research lines for details). We are at present participating in research projects with colleagues in the United States and Canada and the United Kingdom, and we look forward to more extended collaborations in the near future via our #lslpworlwide expansion.

LSLP's work has also received institutional recognition, which positions LSLP as one of the most active student research groups at our home university, as evidenced by our robust academic production, spanning journal articles, working documents, and national and international conference presentations. At present, almost all Novice and Advanced Researchers feature at least one national and one international conference presentation in their CVs, All of our Novice Researchers and almost all of our Advanced Researchers have at least one presentation at ICQI. 12 researchers (2 no longer active) have co-authored papers for AERA, 12 more have coauthored papers for LRA. Out of this group, 7 have actually presented both at AERA and LRA and two of them actually attended AERA and LRA in 2016. Since 2015, we have begun to make an impact in the Colombian ELT community. In 2020, we reached a milestone by sending 13 papers (18 presenters) to the 3rd International Symposium on Research in Foreign Language Teaching (virtual conference). And of course, we must higlight our ongoing presence in the Annual ASOCOPI Congress, the oldest ELT conference in Colombia, featuring as of 2021 a total of 35 presentations, including our staggering participation in 2021 with 17 papers and one of the plenary addresses.

lslp and our relationship with upb

At present, LSLP is associated  with the Pedagogies and Didactics of Knowledge (PDS, in Spanish) Research Group at the School of Education and Pedagogy. LSLP helps anchor the research line "Second Language Studies" (one of five declared by the group) through our ongoing research projects. Specifically, our teacher-researchers (recent graduates from the BA in English-Spanish Education and the MA in Learning and Teaching Processes in Second Languages), have become more active in strengthening the school literacies research line with more classroom-based research. In addition, LSLP has connections with two more research groups in Colombia: Teacher Education Research Group at the Institutional Doctorate in Education at Universidad Distrital and Urban Communication Research Group at the School of Social Sciences at UPB. We have also managed to create a solid network of international research partners.

LSLP as a research unit has also begun to influence the curriculum at the BA in English-Spanish Education: In 2015, LSLP helped redesign the course Communicative Competence V, where students are once again developing research on WebQuests. Since 2016, LSLP has helped redesign the course Methods and Approaches in the Teaching of English (#MATEUPB). The current version of this course features an entire unit devoted to literacies in the language classroom and meaningful participation of several Advanced Researchers supporting one of the core assignments for this course.

The MA in Learning and Teaching Processes in Second Languages became the third master's program at the School of Education and Pedagogy in 2013. This program was the result of a joint effort among researchers at the Faculty of Education and the Language Center. ML2 welcomed its first cohort in July, 2013. Since 2019, the master's program offers on-campus and virtual programs, featuring a robust presence by LSLP researchers through graduate teaching and supervision.

Since the beginning of ML2, LSLP has been actively involved in the program. We proposed the "Literacies in Second Languages" seminar as a way to articulate the research we are doing with the curricular efforts in our graduate programs. The course itself and the research stemming from it has turned literacy into one of the key themes of the master's program.

In addition to the literacies seminar, LSLP has also supported instruction in the research seminars at ML2. LSLP was actively involved in the redesign of the course, both for the on-campus and virtual programs and we expect to continue contributing to these two courses in the near future.

Our involvement with teaching has also brought a great deal of success in supervision and mentoring. Since the first cohort, LSLP has benefited from a regular stream of graduate students contributing ideas, research, and academic production to our project. It is thanks to our graduate students that we were able to establish our school literacies research line. In recent years, as some of our researchers who finished their master's degrees have started mentoring their own graduate students, they are also now inviting their mentees to our research lab.